Tumors spread to other parts of the body when cancer cells can escape into the bloodstream, although it is not exactly clear how they enter the circulation or decide where to form new tumors. Andrew Rhim and colleagues at the University of Pennsylvania have developed a technology to label tumor cells and monitor their movement and activity throughout the body.

In a presentation made on Mar. 9, 2011, at the Keystone Symposia Conference on Stem Cells, Cancer and Metastasis in Keystone, CO, Rhim described a technique to mark pancreatic cancer cells with a fluorescent tag and follow them in mice. Using a genetic mouse model, they were able to analyze the characteristics of pancreatic cancer cells once they enter the blood stream.

Rhim and colleagues found that many of the circulating tumor cells had undergone the epithelial–mesenchymal transition, a process in which cancer cells dedifferentiate from epithelial into mesenchymal-like cells and thereby gain the abilities to proliferate, migrate and invade other tissues. The labeled pancreatic cancer cells Rhim and colleagues isolated from the circulation could be grown in attachment-free cultures, and almost 50% expressed the mesenchymal marker Zeb1 (see below figure). 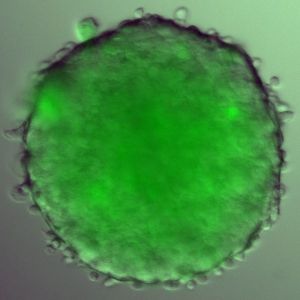 A pancreatosphere, which forms when circulating tumor cells are placed into attachment-free cultures.

Although the circulating tumor cells were originally derived from the pancreatic epithelium (based on the fluorescent label), most had lost expression of epithelial markers such as Ecad, CK19, or EpCAM. However, many expressed markers of cancer stem cells (CD24 and CD44).

“Once the tumor cells go into the circulation, they might be enriched for a stem-cell like phenotype,” reported Rhim. Cancer stem cells are cells that have the capacity to form new tumors, so this finding might account for the highly metastatic potential of pancreatic tumors. Rhim concluded that genetic lineage labeling will be a valuable tool for studying circulating tumor cells and the epithelial–mesenchymal transition during tumor progression.

Dr. Kristine Novak is the science editor for Gastroenterology and Clinical Gastroenterology and Hepatology, both published by the American Gastroenterological Association. She has worked as an editor at biomedical research journals and as a science writer for more than 12 years, covering advances in gastroenterology, hepatology, cancer, immunology, biotechnology, molecular genetics, and clinical trials. She has a PhD in cell biology and an interest in all areas of medical research.
View all posts by Kristine Novak, PhD, Science Editor →
This entry was posted in Cancer, Pancreas, Technology and tagged Cancer stem cell, Diagnosis, Fluorescent marker, Genetic labeling, Imaging, In vivo tracking, Metastasis, Pancreas. Bookmark the permalink.