Measuring blood levels of C-reactive protein (CRP), a marker of inflammation, is a good way to monitor recovery from Crohn’s disease (CD) in patients being treated with infliximab, according to Matthias Jürgens et al. in the May issue of Clinical Gastroenterology and Hepatology.

CRP is a protein released into the blood during the inflammatory response—it is commonly used to follow patients with CD. Jürgens et al. investigated whether it might also be used to determine patients’ response to therapy. They collected blood samples from 718 patients with CD who were being treated with infliximab, an antibody against tumor necrosis factor-α. They then determined whether CRP levels correlated with a need for dose adjustment, outcomes and healing.

Jürgens et al. found that more patients with high baseline levels of CRP responded to infliximab than patients with normal levels, and that normalization of CRP levels soon after therapy began correlated with sustained long-term response (see below figure). 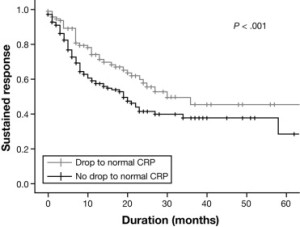 Normalization of levels of CRP within 4 weeks of receiving infliximab therapy is associated with a sustained response, demonstrated by Kaplan–Meier analysis.

CRP levels remained significantly higher among patients who lost their response to infliximab, compared with those with a sustained response. CRP also correlated with mucosal healing, based on endoscopic analysis of 253 patients. Increased levels of CRP indicated mucosal inflammation and a likelihood of clinical relapse.

CRP levels are heterogeneous among patients with inflammatory bowel diseases—they have a low level of correlation with ulcerative colitis, but high levels with CD activity. Jürgens et al. concluded that CRP is a good, noninvasive inflammatory marker that can be used for long-term follow up of patients’ response to therapy, and that monitoring changes in CRP levels might help physicians predict outcome and optimize therapy. The authors would also like to investigate whether these findings apply to other anti-inflammatory agents, such as corticosteroids and adalimumab.

Because high levels of CRP before any therapy was given were associated with better response to infliximab, Jürgens et al. propose that patients who are candidates for anti-tumor necrosis factor therapies, but have a normal level of CRP, undergo additional imaging analyses to rule out other reasons for symptoms, such as strictures, bacterial overgrowth, or irritable bowel syndrome.

The authors warn that after infliximab therapy begins, if CRP levels do not improve or decrease less than 25% from baseline, a new assessment should be done; therapy should be stopped in cases of no mucosal improvement.

Dr. Kristine Novak is the science editor for Gastroenterology and Clinical Gastroenterology and Hepatology, both published by the American Gastroenterological Association. She has worked as an editor at biomedical research journals and as a science writer for more than 12 years, covering advances in gastroenterology, hepatology, cancer, immunology, biotechnology, molecular genetics, and clinical trials. She has a PhD in cell biology and an interest in all areas of medical research.
View all posts by Kristine Novak, PhD, Science Editor →
This entry was posted in GI Tract, Technology and tagged blood test, colitis, Crohn's Disease, efficacy, IBD, immune response, mucosa, prognosis, treatment. Bookmark the permalink.