Certolizumab and Remission in Some Patients With Crohn’s Disease

The drug certolizumab pegol induces remission in patients with Crohn’s disease who have high baseline levels of inflammation, according to William Sandborn et al. in the August issue of Clinical Gastroenterology and Hepatology.

Patients with moderate to severe Crohn’s disease that do not respond conventional therapy are often treated with antibodies against tumor necrosis factor (TNF), such as infliximab and adalimumab. Sandborn and colleagues assessed the efficacy of induction therapy with certolizumab— a pegylated antibody against TNF—in 439 patients with active Crohn’s disease, at 120 centers in 20 countries.

The study included patients with moderate to severe Crohn’s disease who had not previously received anti-TNF therapy; they were given either subcutaneous injections of 400 mg certolizumab or placebo at weeks 0, 2, and 4. The primary end point was clinical remission at week 6.

Thirty-two percent of patients in the certolizumab group were in remission at week 6, compared with 25% of patients in the placebo group—not a statistically significant difference. However, among patients with high baseline concentrations of C-reactive protein (CRP, 5 mg/L), the difference in remission rates between the certolizumab and placebo groups was significant (see below figure). 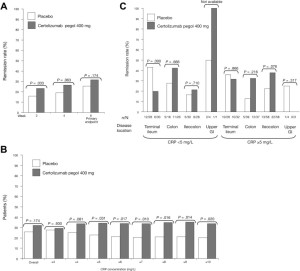 Response of patients with Crohn's disease to certolizumab or placebo.

CRP is a blood protein that is a marker of inflammation. It binds to phosphocholine on the surface of dead or dying cells (and some bacteria) to activate the complement system. Greater effects of anti-TNF agents in patients with higher baseline levels of CRP have been reported in other studies. So these drugs might work best in patients with high levels of inflammation.

The high percentage of remission Sandborn et al. observed among patients given placebo (25%) might have resulted from the fact that many did not have high levels of inflammation when the study began (levels of CRP less than 4 mg/L). These patients were therefore more likely to resolve their symptoms without receiving drug treatment. There were no significant differences in side effects between groups.

Sandborn et al. propose that the best candidates for anti-TNF therapy, in trials and practice, are patients who not only have symptoms of active disease, but also objective evidence of inflammation, such as increased blood concentrations of CRP, fecal biomarkers of intestinal inflammation (calprotectin or lactoferrin), or imaging findings (by ileocolonoscopy and computed tomography or magnetic resonance imaging enterography).

Other subgroups of patients that had significantly higher rates of clinical remission compared with placebo at week 6 included patients younger than 40 years old, men, patients with colonic or ileocolonic involvement, those had not received surgery, patients with a short duration of disease, and those with Crohn’s disease activity scores above 300.

Dr. Kristine Novak is the science editor for Gastroenterology and Clinical Gastroenterology and Hepatology, both published by the American Gastroenterological Association. She has worked as an editor at biomedical research journals and as a science writer for more than 12 years, covering advances in gastroenterology, hepatology, cancer, immunology, biotechnology, molecular genetics, and clinical trials. She has a PhD in cell biology and an interest in all areas of medical research.
View all posts by Kristine Novak, PhD, Science Editor →
This entry was posted in GI Tract, Technology and tagged clinical trial result, colitis, efficacy, IBD, Inflammation, outcome, respose to therapy, Side Effects, therapy, TNF inhibitor. Bookmark the permalink.