LX1031, a drug that inhibits serotonin production, relieves symptoms and increases stool consistency in patients with nonconstipating irritable bowel syndrome (IBS), according to a study by Philip Brown et al. in the August issue of Gastroenterology.

Serotonin (also called 5-hydroxytryptamine or 5-HT) is a neurotransmitter that controls mood and cognition, as well as gastrointestinal secretion, motility, and visceral perception. Serotonin synthesis requires the enzyme tryptophan hydroxylase (TPH). Altered functions and levels of TPH-1, serotonin, and its reuptake transporter, have been implicated in the pathogenesis of gastrointestinal disorders, including IBS.

In a Phase 2 trial, Brown et al. studied whether inhibition of TPH in the gastrointestinal tract with the small molecule LX1031 could reduce mucosal production of serotonin and symptoms of nonconstipating IBS. One hundred fifty-five patients with nonconstipating IBS were given placebo or LX1031 (250 mg or 1000 mg), 4 times each day, for 28 days. Efficacy was determined based on weekly assessments and daily diaries.

A significantly greater number of patients given the high dose (1000 mg) of LX1031 reported adequate relief from symptoms during the first week of therapy (47.5%), compared with the subjects given placebo 1 (22.0%). Although the first week had the strongest effect, over 4 weeks, the high-dose group had significant improvements in adequate relief from nonconstipating IBS pain and discomfort. Furthermore, stool consistency (measured by the Bristol Stool Form Scale) improved at weeks 1, 2, and 4 in group given the high dose of LX1031, compared with placebo. After therapy was stopped, the observed improvements disappeared rapidly—values were similar for both dose groups and placebo after 1 week.

How does this drug work? According to Brown et al., release of serotonin from mucosal enterochromaffin cells activates the projections of intrinsic primary afferent neurons, which  activate the microcircuits that regulate secretory and peristaltic reflexes. Serotonin also stimulates extrinsic primary afferent neurons to convey noxious signals, including pain and nausea, to the central nervous system. Inhibiting gastrointestinal levels of TPH, and thereby reducing levels of serotonin, might reduce these noxious signals (see below figure). 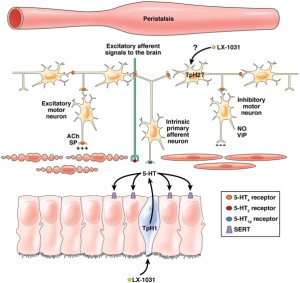 Brown et al. observed that reduced symptoms correlated with a dose-dependent reduction in urine levels of 5-HIAA, a marker for TPH inhibition, from baseline until week 4. The authors concluded that the efficacy of LX1031 was related to the inhibition of serotonin biosynthesis.

However, in an accompanying editorial, Jan Tack et al. state that although symptoms returned to baseline levels and were comparable with those of the placebo group 2 weeks after treatment ended, urinary levels of 5-HIAA were still reduced in more than 20% of the high-dose group, compared with 6%–7% in the placebo group. Tack et al. conclude that there is not necessarily a direct relationship between urinary 5-HIAA level and symptom improvement, and that this molecule requires further validation as a biomarker.

Dr. Kristine Novak is the science editor for Gastroenterology and Clinical Gastroenterology and Hepatology, both published by the American Gastroenterological Association. She has worked as an editor at biomedical research journals and as a science writer for more than 12 years, covering advances in gastroenterology, hepatology, cancer, immunology, biotechnology, molecular genetics, and clinical trials. She has a PhD in cell biology and an interest in all areas of medical research.
View all posts by Kristine Novak, PhD, Science Editor →
This entry was posted in GI Tract, Technology and tagged bloating, Clinical Trial, constipation, drug, efficacy, IBS, irritable bowel syndrom, nausea, pain, Side Effects, symptom reduction, therapy, Toxicity, treatment. Bookmark the permalink.

3 Responses to New Treatment for IBS