How Do Proton Pump Inhibitors Increase Intestinal Damage from NSAIDS?

Taking a proton pump inhibitor (PPI) to reduce stomach damage from nonsteroidal anti-inflammatory drugs (NSAIDs) can damage the intestine by disrupting the microbiota, according to a study by John Wallace et al. in the October issue of Gastroenterology.

Patients who take NSAIDs are frequently given PPIs to reduce gastric acid and the damage it causes. However, approximately 70% of chronic NSAID users develop inflammation of the small intestine, which can lead to bleeding, strictures, and occasional perforations. To make matters worse, there is a high incidence of small intestinal damage among patients who take a NSAID and PPI together—the PPI confers little, if any, protection to the mid- and distal small intestine.

Wallace et al. investigated intestinal effects of the combination of these drugs. They gave rats the PPIs omeprazole or lanzoprazole for 9 days, along with anti-inflammatory doses of naproxen (an inhibitor of COX-2 and COX-1) or celecoxib (a COX-2–specific inhibitor) on the final 4 days.

Omeprazole alone did not cause mucosal injury or inflammation, but caused shifts in the numbers and types of enteric bacteria. Rats given omeprazole had significant increases in the numbers of aerobic bacteria (both gram-negative and gram-positive) in the jejunum, but a significant reduction (80%) in  Actinobacteria and Bifidobacteria spp. Administration of Bifidobacteria-enriched bacteria prevented intestinal ulceration or bleeding in response to omeprazole or naproxen. 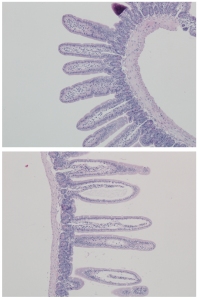 Gastric acid kills most bacteria, so the authors propose that chronic suppression of acid with a PPI might lead to overgrowth of types of bacteria in the small intestine that promote the NSAID-induced intestinal damage.

The mechanisms of intestinal and gastric damage from NSAIDs differ. Whereas inhibition of mucosal COX-1 and COX-2 leads to the development of gastric lesions, the small intestinal damage has been tied to the enterohepatic circulation and the consequent repeated exposure of the intestinal epithelium to these drugs in the presence of bile.

Wallace et al. were surprised that there have not been clinical studies to examine the effects of PPIs on NSAID-induced enteropathy, given the widespread use of these drugs. However, it is difficult to assess damage in the distal small intestine using conventional endoscopy. The authors propose trials that use video capsule endoscopy to examine the impact of PPIs on NSAID-induced enteropathy, and investigate whether prebiotics or probiotics can prevent or reverse dysbiosis and reduce the incidence and severity of NSAID-induced intestinal damage.

However, a careful evaluation of the use of PPIs together with NSAIDs is needed. The benefits of reduced gastroduodenal damage and bleeding from PPI therapy could be offset by more distal damage, which is more difficult to detect.

Dr. Kristine Novak is the science editor for Gastroenterology and Clinical Gastroenterology and Hepatology, both published by the American Gastroenterological Association. She has worked as an editor at biomedical research journals and as a science writer for more than 12 years, covering advances in gastroenterology, hepatology, cancer, immunology, biotechnology, molecular genetics, and clinical trials. She has a PhD in cell biology and an interest in all areas of medical research.
View all posts by Kristine Novak, PhD, Science Editor →
This entry was posted in GI Tract, Technology and tagged Acid Secretion, Bleeding, Microflora, ulcer. Bookmark the permalink.

4 Responses to How Do Proton Pump Inhibitors Increase Intestinal Damage from NSAIDS?