Fishing for Genes that Cause Biliary Atresia

A study of zebrafish has helped identify a susceptibility gene for biliary atresia, as reported in the May issue of Gastroenterology.

Biliary atresia is a progressive fibro-inflammatory disorder of infants that involves the extrahepatic and intrahepatic biliary tree and causes obliteration of the ducts, leading to cholestasis, fibrosis, and cirrhosis. If uncorrected, it causes death within the first 2 years of life.

The causes of this disease are unknown, but are believed to involve exposure of a genetically susceptible individual to specific environmental factors.

Shuang Cui et al. took a closer look at the chromosome region, searching for copy number variants that were increased among 61 children with the disease, compared with 5088 healthy individuals.

They found that the patients had a significant increase in deletions at 2q37.3 that resulted in deletion of one copy of GPC1. This gene encodes glypican 1—a heparan sulfate proteoglycan that regulates hepatogenesis, Hedgehog signaling, and inflammation.

To learn how deletion of GPC1 could affect biliary development, they reduced its expression in zebrafish. Zebrafish are useful for studying development—embryos develop rapidly ex utero, and their hepatobiliary development and anatomy are similar to those of mammals. By 5 days after fertilization, the zebrafish liver has distinct hepatocytes and cholangiocytes, with an interconnecting duct network. Organs in embryonic zebrafish can be imaged in vivo, and gene expression can be reduced using morpholino antisense oligonucleotide-mediated knockdown techniques.

Cui et al. found that knockdown of gpc1 in developing zebrafish led to intrahepatic biliary and gallbladder defects, observed at the late larval stage (5 days after fertilization). During normal embryogenesis, zebrafish at this stage have developed intrahepatic main ducts, interconnecting branches, and terminal ductules. The knockdown fish had fewer cholangiocytes, resulting in a less complex architecture than controls (see below figure). 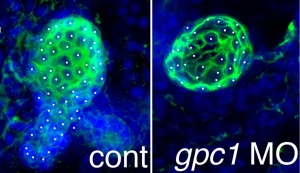 Gpc1 knockdown zebrafish (gpc MO) have a decreased number and complexity of ducts, compared with controls. Cells are indicated by white dots.

Activity of the signaling protein Hedgehog is increased in patients with biliary atresia, and GPCs are known to regulate its activity. Cui et al. compared expression of genes known to be regulated by Hedgehog (gli2a, ptch1, floxl1, znf697, and ccnd1), and found it to be increased in livers from gpc1 knockout embryos.

The authors propose that these findings are consistent with a model in which glypicans modulate Hedgehog activity by acting as a sink, decreasing the availability of ligand—the absence of glypican increases Hedgehog signaling.

Cui also found that liver samples from patients with BA had reduced levels of apical GPC1 in cholangiocytes, compared with samples from controls.

This is the first study to identify a potential risk gene in patients with biliary atresia and to show functional defects in the biliary system in a model organism. These findings also support a role for Hedgehog signaling in the pathogenesis of BA.

In an editorial that accompanies the article, Alexander Miethke and Stacey Huppert state that Cui et al. have shown that zebrafish are a useful tool to assign biological significance to results of genomic studies.

Dr. Kristine Novak is the science editor for Gastroenterology and Clinical Gastroenterology and Hepatology, both published by the American Gastroenterological Association. She has worked as an editor at biomedical research journals and as a science writer for more than 12 years, covering advances in gastroenterology, hepatology, cancer, immunology, biotechnology, molecular genetics, and clinical trials. She has a PhD in cell biology and an interest in all areas of medical research.
View all posts by Kristine Novak, PhD, Science Editor →
This entry was posted in Liver/Biliary, Technology and tagged Animal Model, babies, biliiary tract, defect, gene, Genetics, hedgehog signaling, liver development, newborn, zebrafish. Bookmark the permalink.

4 Responses to Fishing for Genes that Cause Biliary Atresia