How Can the Gut Microbiota Contribute to Liver Disease?

Microbes that reside in colons of obese individuals produce many compounds that could contribute to development of non-alcoholic fatty liver disease (NAFLD) and other complications of obesity, according to a study published in the July issue of Clinical Gastroenterology and Hepatology.

Microorganisms living in the human intestine (gut microbiota) affect digestion, energy metabolism, inflammatory signaling pathways, and even liver function. Changes in the gut microbiota have been associated with obesity, diabetes, metabolic syndrome, and liver disease. The microbiota of obese individuals has been reported to have less diversity and altered concentrations of specific types of microbes, compared with lean individuals.

Chronic excessive ingestion of ethanol produces liver steatosis, steatohepatitis, and cirrhosis. Gut microbes are an endogenous source of ethanol, which can be continuously delivered to the liver. The microbes also produce about 300 other volatile organic compounds (VOCs), but little is known about their effects on liver or other organs.

Maitreyi Raman et al. investigated whether there are specific compositional and functional characteristics of the gut microbiome and their associated VOCs in obese individuals that could affect development of NAFLD.

They compared the colonic microbiome and VOC metabolome of 30 obese patients suspected of having NAFLD (based on increased serum levels of liver enzymes and sonographic evidence of steatosis) with those of 30 healthy-weight individuals (controls) by multi-tag pyrosequencing of fecal samples. Fecal VOC profiles were measured by gas chromatography–mass spectrometry.

The authors found that the fecal microbiome of the obese individuals was significantly altered in composition and VOC profile, compared with controls.

Controls had an average of 64 distinct VOCs, whereas the obese individuals had an average of 72. Ethanol, acetone, heptanone, butanoic acid, and pentanoic acid were present in fecal VOC samples from both groups. However, there were 12 fecal VOCs that were significantly less common in the obese individuals (including aldehydes, furans, ketones) and 18 that were significantly more prevalent (including aliphatic esters of ethanoic, propanoic, butanoic, and pentanoic acids). Raman et al. state that these have plausible links to NAFLD as hepatotropic or hepatotoxic factors.

The authors also observed several families of microbes that were increased in the obese participants—especially in the Kiloniellaceae and Pasteurellaceae families, which have been previously associated with various states of intestinal dysbiosis.

Three Firmicutes also were increased significantly in the obese subjects (Lactobacillaceae, Veillonellaceae, and Lachnospiraceae). This finding was consistent with an animal study associating increased Lachnospiraceae with liver steatosis. 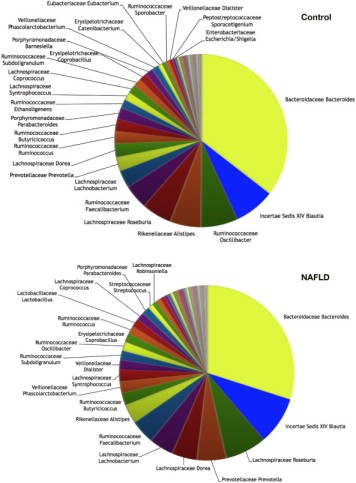 Relative abundance of various bacterial taxa in the fecal microbiome of control subjects and obese individuals with suspected NAFLD. The labels indicate family and genus.

Where do the observed VOCs come from? Most of the esters the authors associated with obesity and NAFLD are derivatives of short-chain aliphatic alcohols and carboxylic acids. Bacterial esterases can catalyze reactions that involve such organic acids and alcohols to produce the observed ester VOCs. The authors also propose that the esters could be formed by nonenzymatic reactions that involve gut luminal or bacterial substrates.

In an editorial that accompanies the article, Jerome Boursier et al. say that future studies should include obese individuals without NAFLD and lean subjects with NAFLD, as well as larger numbers of patients, followed long term, to overcome the high rates of inter-individual variation. Studies are also needed to collect data on host genetic and environmental factors (e.g., diet, smoking, stress) that could affect the composition of the microbiota and its physiologic effects.

Future quantitative analysis of VOCs could identify specific profiles for use in diagnosis or prognosis of patients with liver diseases.

Dr. Kristine Novak is the science editor for Gastroenterology and Clinical Gastroenterology and Hepatology, both published by the American Gastroenterological Association. She has worked as an editor at biomedical research journals and as a science writer for more than 12 years, covering advances in gastroenterology, hepatology, cancer, immunology, biotechnology, molecular genetics, and clinical trials. She has a PhD in cell biology and an interest in all areas of medical research.
View all posts by Kristine Novak, PhD, Science Editor →
This entry was posted in GI Tract, Liver/Biliary and tagged bacteria, Colon, fatty liver disease, fecal samples, flora, intestine, metabolism, microbiota, NAFLD, NASH, profile, steatosis. Bookmark the permalink.