For Pancreatic Cysts—(Change in) Size Matters

The speed of cyst growth predicts whether branch duct intraductal papillary mucinous neoplasms (Br-IPMNs) will become malignant, according to a study by Mee Joo Kang et al. in the January issue of Clinical Gastroenterology and Hepatology.

IPMN is a premalignant pancreatic lesion that progresses from adenoma to carcinoma; cysts are detected by imaging, but little is known about which ones are most dangerous. Some studies have proposed that patients with an asymptomatic Br-IPMN cyst smaller than 3 cm, without mural nodules or abnormal cyst fluid cytology, have less than a 20% risk of malignancy.

Kang et al. followed 201 patients diagnosed with Br-IPMNs who had an initial cyst smaller than 30 mm for more than 3 months, and examined them by computed tomography at least twice. Their mean cyst growth rate was 1.1 mm/year. Eight of 35 patients who received surgery developed malignant cysts, which were greater in final size than nonmalignant cysts (24.3 mm vs. 16.9 mm); the malignant cysts also grew by a greater percentage (69.8% vs. 19.4%) and at a greater rate (4.1 mm vs. 1.0 mm/year). After 5 years, cysts that grew more than 2 mm/year had a 45.5% risk of malignancy, compared with 1.8% for cysts that grew more slowly; emergence of a mural nodule during the 5-year follow-up period increased risks of malignancy by 41.3%. 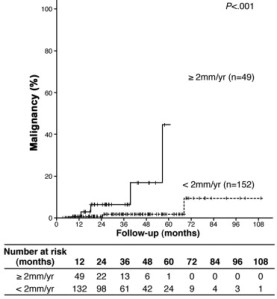 Previous studies reported that only 6% to 16% of cysts increase in size, but Kang et al. found that 40.8% of cysts grew by more than 20%. Smaller cysts had greater growth rates, and 60% of patients who developed mural nodules during the follow-up period had an initial cyst size of 20 mm. These findings indicate that even small Br-IPMNs need constant surveillance.

Kang et al. warn that patients with rapidly growing cysts have a large risk for developing malignant tumors, and that the presence of mural nodules increases this risk. On the other hand, patients with Br-IPMNs of 20 mm or less that grow less than 2 mm/year, without a mural nodule, have low risk for malignancy and can probably be observed.

Dr. Kristine Novak is the science editor for Gastroenterology and Clinical Gastroenterology and Hepatology, both published by the American Gastroenterological Association. She has worked as an editor at biomedical research journals and as a science writer for more than 12 years, covering advances in gastroenterology, hepatology, cancer, immunology, biotechnology, molecular genetics, and clinical trials. She has a PhD in cell biology and an interest in all areas of medical research.
View all posts by Kristine Novak, PhD, Science Editor →
This entry was posted in Pancreas and tagged Branch Duct, Cancer, Carcinoma, Intraductal Papillary Mucinous Neoplasm, Natural History, Pancreas, Tumor. Bookmark the permalink.

1 Response to For Pancreatic Cysts—(Change in) Size Matters